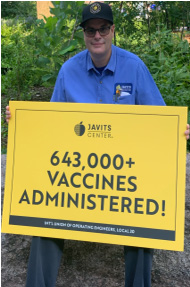 Will Rogers, on being chastised for not being a war hero, responded with wit:

“We can’t all be heroes because somebody has to sit on the curb and applaud when they go by.”

There have been a lot of Broadway ticker-tape parades for war heroes in New York City over the years. But on July 7, 2021, the parade world was truly turned upside down. On that day, our “Hometown Heroes” during the pandemic — the essential workers who kept us safe in New York City — the humble people who normally sit on the curb and clap — were the paraders. 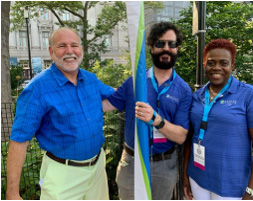 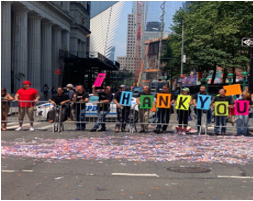 There have been 206 ticker-tape parades dating back to 1886, but in recent years, fewer and fewer. And unless you are an entire New York sports team, it has become harder and harder to get one thrown.

On that day, right where President Kennedy once cruised by as part of his triumphant presidential campaign, sanitation trucks now instead rolled triumphantly, their vehicles as proud as chariots returning from battle in ancient Rome.

How proud were the sanitation workers? They brought their own bagpipers. 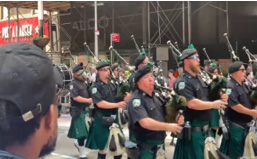 On that day, right where General Douglas MacArthur once strode with his formal military uniform, bodega shelf-stackers marched in the most informal of blue jeans.

On that day, right where British royalty like Queen Elizabeth II once adjusted her colorful crown, funeral home staff instead adjusted their dark suits and ties.

On that day, where Pope John Paul II once blessed throngs of cheering crowds, local ministers wearing “God Squad” T-shirts instead mingled with the people on and of the street. 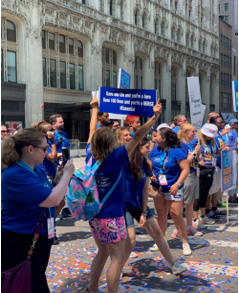 And on that day, nurses and vaccinators shook and shimmied and sang to rock and roll while carrying signs which proudly (and accurately) proclaimed:

The Bible says that someday the last will be the first. It must have foreseen July 7, 2021, on Broadway in New York City. On that day the sanitation workers, the bodega workers, the funeral home workers, the nurses and the vaccinators — they all came first.

Even while it has become a lot harder to get a tickertape parade thrown for you, they can’t stop you from asking. That was my small role. On May 28.2021, I wrote to the office of Mayor Bill de Blasio, asking for a parade for the “essential workers” who were the oxygen for New York — both literally and figuratively — throughout the pandemic.

Earlier that week, I had been at a luncheon with a family friend, a nursing administrator in the New York metropolitan area,a person of deep Catholic faith. Hearing her recount her stories during the pandemic touched me. Phone calls at odd hours to come down to the ICU to be the last person to hold hands with someone — dying alone. Literally being called upon to recruit enough nurses to administer enough vaccines to fill a sports stadium on short notice. Competing for those nurses was a large New York City hospital, who was paying a king’s ransom; replacing health care workers, who in recent days were quitting in droves — weary, worn out, overworked: and somehow, managing to spin in that revolving door without getting dizzy.

While others were resigning, this quiet, unassuming nurse administrator had stood her ground, stretched out her arms, widened her stance in her Danskos and held the hospital building’s columns up. And hers was just one story: there were so, so many others.

“Nurses,” as the saying goes: “Just another word to describe a person strong enough to tolerate everything, and soft enough to understand everyone.“

To make the situation even more desperate, this friend told me that when she had to supply nurses for the sports stadium, a few of them, offered early access to the vaccine in return for administering it, had received their vaccines — and then never returned. Her Irish eves flashed just a touch of indignation — but soon her proud smile returned. She just replaced them too. I could think then of only one thing:

She deserved a parade.

It only took a few days for the mayor’s newly appointed Executive Director for Citywide Events, Dan Gross, to respond to the letter:

“The Mayor loved your letter, we are going to do it.” he said.

My letter had been planted on fertile soil. A year earlier, Mayor de Blasio had promised a ticker-tape parade when the pandemic was over. The Executive Director said he had showed the mayor my letter, and that the mayor had asked him:

“Do the people want this?”

To which he simply responded,

“Sure, look at the letter this guy wrote.”

I saw this quote online recently:

“A disco ball is 100 pieces of broken glass put together to make a magical ball of light. You aren’t broken. You’re a disco ball.“

On July 7, 2021, many of those pieces of “broken glass” came together and marched. They shook and they shimmied. They shone down Broadway brighter than any president or sports star or royalty had ever shined before. In a city desperate for a party, these “Hometown Heroes” marched not as individuals and not just for themselves. No, they marched in group after group together, in waves like an advancing army, a modern “salvation army.”